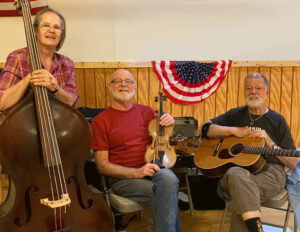 This high-energy group is known for their Southern Appalachian Old-Time String Band sound and engaging vocal harmonies! In concert or for a dance, this band will excite and inspire you to listen, dance and even sing along. Fun to listen to and entertaining to watch!

The term Rounders has been used by many bands over the years when referring to the band members. A Rounder, according to Dictionary.com first appeared in 1620 defined as “one who makes the rounds.” Though there are many other recent definitions of the term, this seems to be the most appropriate for a group of musicians who traveled around to play music for concerts and dances throughout the country.

Our old-time friends will recognize the use from bands such as Charlie Poole and The North Carolina Rounders or perhaps more modern references such as The North Fork Rounders from NE Ohio, The Reed Island Rounders from VA or the Morgantown Rounders from, well, Morgantown, WV. It is in that venerated tradition that I have adopted the name Rounders for the

Dan Levenson (Fiddle, banjo and vocals), George Flink (Guitar )and Kate Fox (Bass) will provide you and your event with spirited music, songs and stories from the road!